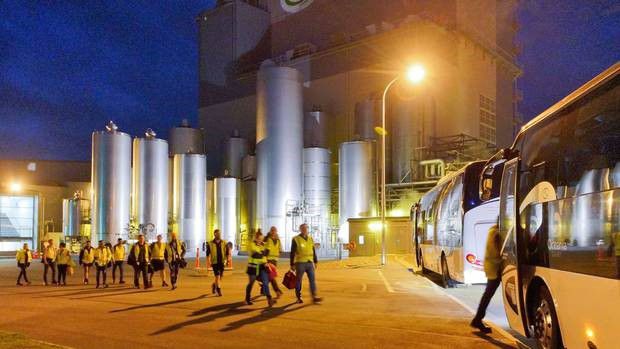 Special buses for workers will start running daily from Timaru and Oamaru to the Oceania dairy plant in Cooneys Rd, Morven, next month as the company ramps up major development in South Canterbury and looks to further expansion on the West Coast.

A total of 300 staff are employed at the Morven plant, which is owned by the Chinese Government’s Inner Mongolia Yili Industrial Group, of whom about 40% are from Timaru, 30% are from Waimate and the remainder are from Oamaru.

“Workers do 12-hour shifts, from 6am to 6pm, and it’s a way to attract and retain staff. We want to make sure they get to work and home safe,” interim plant manager Richard Hickson said.

“We’ll be contracting Hilton Haulage to do it for us. The Timaru bus will also pick up Waimate staff.”

With work due to start soon on building a new laboratory, an ultra-high-temperature (UHT) milk-processing plant with new dry store, loadout facilities and service utilities, the plant would be recruiting between 70 and 100 staff in the next year, Mr Hickson said.

The proposed sale needs the approval of at least 75% of shareholders.

Westland chairman Pete Morrison said the board believed the proposed transaction represented the best available outcome for shareholders, and had the board’s unanimous support.

“The acquisition price represents an attractive price to the Westland shares’ nominal value.”

Westland would seek shareholder approval for the proposed transaction at a special shareholder meeting expected to be held in early July.

Mr Dickson said providing staff buses from Timaru and Oamaru to the Morven plant was a strategy designed to attract local staff.

“Our policy is to employ as many local people as possible.

“Hopefully, it [the bus service] will allow us to tap into the Timaru market. Positions available will be across the board – engineering, IT roles, process control, management, laboratory, supervisor roles, HR roles, administration and roles that are highly technical.

“This is a very technical industry, so we look for people with a good mechanical aptitude.”

He said it could be difficult finding the right people. However, Oceania was prepared to train them as long as they had mechanical capabilities.

“We will train them over a number of years but we will also bring in people with special skills from outside the region.”

Mr Hickson said the expansion planned at the plant over the next 12 months would be challenging.